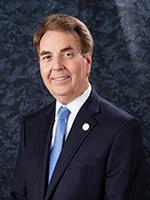 Greg Powers has been a member of the Harlingen CISD Board of Trustees since May 2010 and is a certified Master School Board Trustee by TASB. A graduate of Harlingen High School, the University of Texas at Austin, and St. Mary’s University School of Law, Mr. Powers has been a practicing attorney for over 35 years.

Mr. Powers and his wife Julie have been married for over 40 years. Their family includes two sons – Steves and Charlie, daughter-in-law Kasey, and a grandson named Jackson.

In 2019, Mr. Powers was part of the team recognized as Board of the Year by the Texas Association of School Administrators.