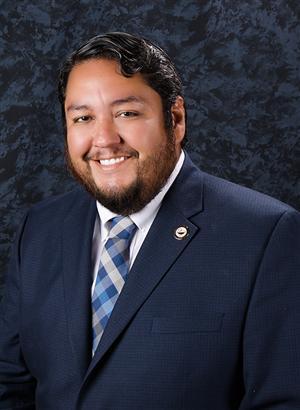 Eladio Jaimez is a native of Harlingen and worked for the Valley Morning Star for 12 years as a sportswriter, where he recorded many of our HCISD student-athletes’ achievements and successes.

Over the years, Mr. Jaimez developed many great relationships with coaches, parents and public officials that shared the same vision for Harlingen and the Rio Grande Valley. In 2008, he and the Valley Morning Star teamed up with the Harlingen Hispanic Chamber of Commerce to establish the RGV All-Star Sports Awards, which recognized Valley athletes and coaches for their work during the school year. The annual banquet still honors student-athletes across the Valley today and is known as the All-Valley Sports Awards Banquet.

Mr. Jaimez was nominated for the Texas High School Coaches Association Putt Powell Sportswriter of the Year Award twice (2011, 2016) and also earned an APME Sports Writing award for his reporting in 2011.

In 2012,  Mr. Jaimez joined Texas State Technical College where he worked as a Communications Specialists in the Communication and Creative Services department. His duties included the marketing and promotion of TSTC’s high-valued technical programs.

In 2015, Mr. Jaimez joined AEP Texas as a Communications Consultant where the company’s culture encourages and fosters community involvement.

In 2019, Mr. Jaimez was part of the team recognized as Board of the Year by the Texas Association of School Administrators.