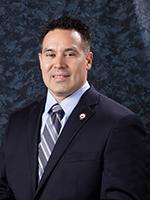 Dr. Bobby Muñiz has been a member of the Harlingen CISD Board of Trustees since June 2014. In 2016, he was selected by the Texas Association of School Boards to participate in the Leadership TASB Class of 2017.

Born and raised in Harlingen, Texas, he graduated in the class of 1992 at Harlingen High School and is a former student of Treasure Hills Elementary and Coakley Middle School.
After his educational journey at HCISD, Dr. Muñiz received his Bachelor of Science degree from Texas A&M University, College Station in 1998.

After graduation at Texas A&M, he worked for Kroger Manufacturing in Fort Worth, TX. While at Kroger he learned about managing employees and the importance of having systems in place to produce consistent results.

Dr. Muñiz went on to receive his MBA from St. Mary's University in 2002. After graduation, he moved to Columbus, OH where he worked for Abbott Laboratories. While working as a production supervisor at Abbott, Bobby learned the importance of workflow management.

While in Columbus, he realized an opportunity and chose to pursue his dream of becoming a pharmacist. In 2004, he moved to Houston to attend pharmacy school at Texas Southern University where he met his beautiful wife, Amy.

After graduation at TSU, Dr. Muñiz and Amy moved to Harlingen and were married. They have four beautiful children, Sophia Amor, John Robert, Patrick Robert, and Ariel who love music, dancing and group hugs.

Dr. Muñiz is now helping run the family business as co-owner at Muñiz Rio Grande Pharmacy, which has been serving the Harlingen community for over 40 years. He is also owner and Head Coach of Training For Warriors Harlingen.

In 2019, Dr. Muñiz was part of the team recognized as Board of the Year by the Texas Association of School Administrators.